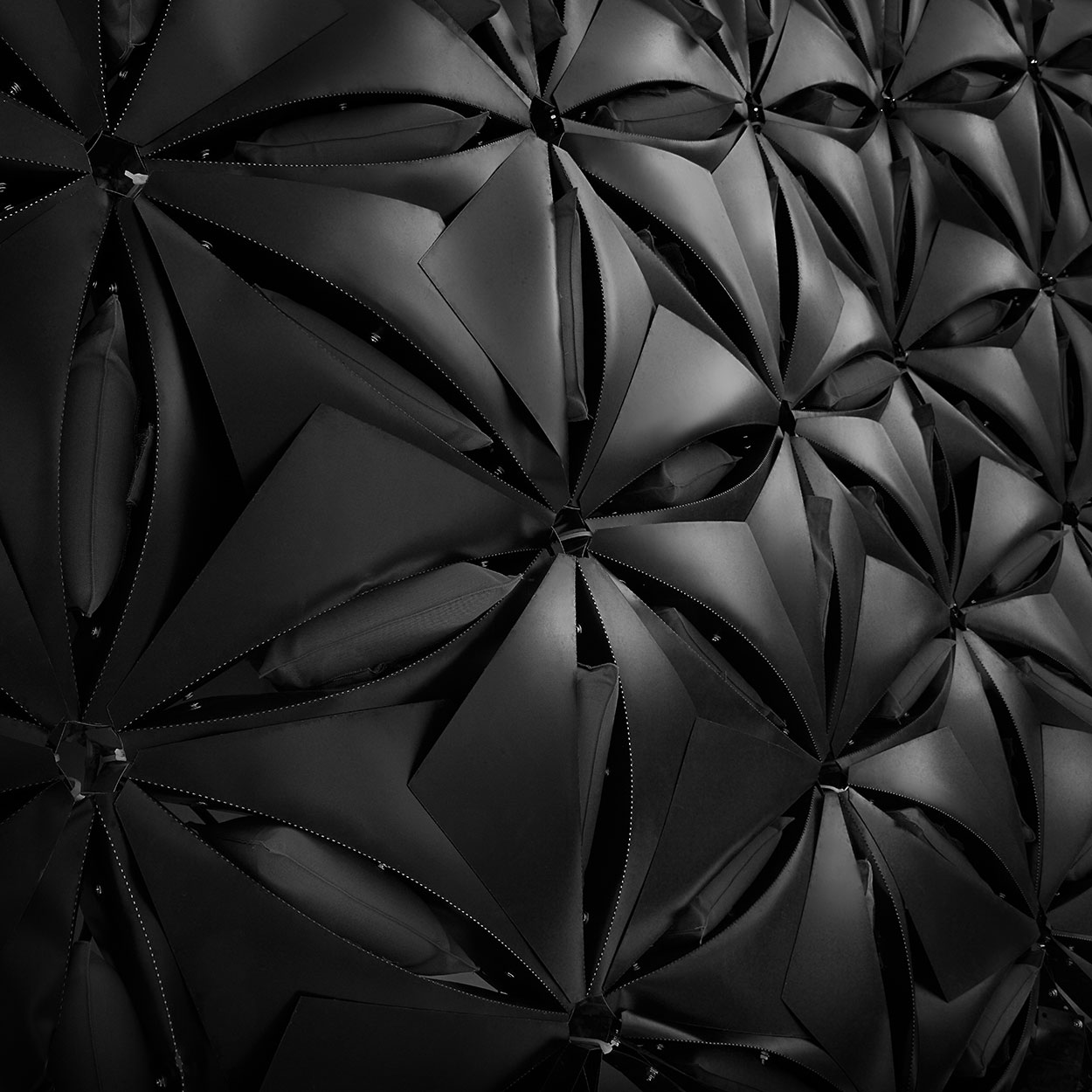 Energy efficiency and sustainability are of fast growing importance in contemporary architecture, consequently the demand for adaptive building envelopes is increasing. Until now kinetic and adaptive building systems are mostly utilised by rigid components or flexible membranes, guided along straight translation axis or rotational movements – resulting in geometrical constraints. The high mechanical complexity and as a consequence thereof high demand of maintenance as well as the tendency to complex building geometries in contemporary architectural design make it valid to investigate compliant mechanisms as alternative solutions of adaptive building systems.

Compliant mechanisms achieve their flexibility by controlled elastic deformation of flexible members. In contrast to conventional rigid body mechanisms they consist of only one part with locally defined stiffness. These mechanisms can transfer motion, force or energy upon deformation of the flexible parts. The main advantage of compliant mechanisms is the reduction of parts, resulting in an economical potential due to simplified manufacturing and assembly. Furthermore, wear can be reduced and other than in classical joints there is no need for lubrication and maintenance (Howell 2013).

Compliant systems for architectural applications have been realised with projects such as the Thematic Pavilion at the EXPO 2012 in South Korea (SOMA Architects with Kinppers Helbig Advanced Engineering), as well as the Flectofin®  (Schleicher et al. 2015) and Felctofold (Körner et al. 2016) façade shading devices, developed at ITKE University of Stuttgart, which was inspired by the opening mechanism of the Strelitzia Reginae and Aldrovanda. The mentioned examples make use of the elasticity of the used materials – mainly fibre reinforces polymers (frp) – in combination with geometrical articulation to adapt their shape through elastic deformation to distinct functional demands, without mechanical hinges or the geometrical constraints of linear translation axis.

After 3 days investigating different strategies in small groups, one approach was chosen for further development and construction of a prototype during an intense 10 days design and construction workshop by all students and tutors together.

The workshop included a series of software tutorials and lectures integrated into a research based design and construction project. The workshop was open for students of fields of design, architecture, scenography, and engineering.

The proposed system for further development is composed of curved-line folded kinetic elements which are pneumatically actuated and assembled along a triangulated tessellation pattern of an underlying double curved surface (Figure 2). Each edge of the underlying triangulated mesh is translated into one curved-line folding mechanism. Therefore, the edges are extruded and split into two parts. Each of them is connected by a curved-line fold to a flap, which closes after actuation. Between the two edge elements a pneumatic cushion is located. By inducing pressure, the edges bend which leads to the desired closing movement of the flaps. A comparatively small bending deformation is necessary to close the component completely, due to geometric movement amplification of kinetic curved line folding. (Körner et al. 2016). Due to time constraints, the prototype was built with polypropylene instead of custom laminated gfrp. To ensure structural integrity as well as the necessary elastic energy to open the components after pressure release, the component edges are reinforced with spring steel.

The depth of the stiffer edge parts follows the force flow within the structure. Therefore, a structural finite element Analysis with Karamba was performed, considering dead-load and wind-load. The acting forces in each node of the underlying triangulated mesh corresponds to the extrusion depth in local z direction to the surface. The values are chosen according to a maximum allowable deflection under the simulated loading conditions (Figure 2).

Due to the shortening of the component’s length after actuating kinetic curved-line folding mechanism, they usually require connections which allow for sliding and rotation along their substructure. In the here proposed system, the components are connected by bent joints in each node of the underlying triangulated mesh (figure 1). Those bending-active joints allow for compensation of the described contraction during the folding movement by elastic deformation. The stored energy is also used to open the components again after pressure release. Therefore, norotating or sliding connections to a substructure are necessary.

The component system is based on edges and therefore suitable for all polygonal tessellation patterns and adaptive to synclastic and anticlastic curvature, which makes it promising for architectural applications on complex geometries.

In future development it is planned to scale the system up to more architectural relevant size. Also, it is intent to transfer the mechanism to customized material layup, using gfrp.