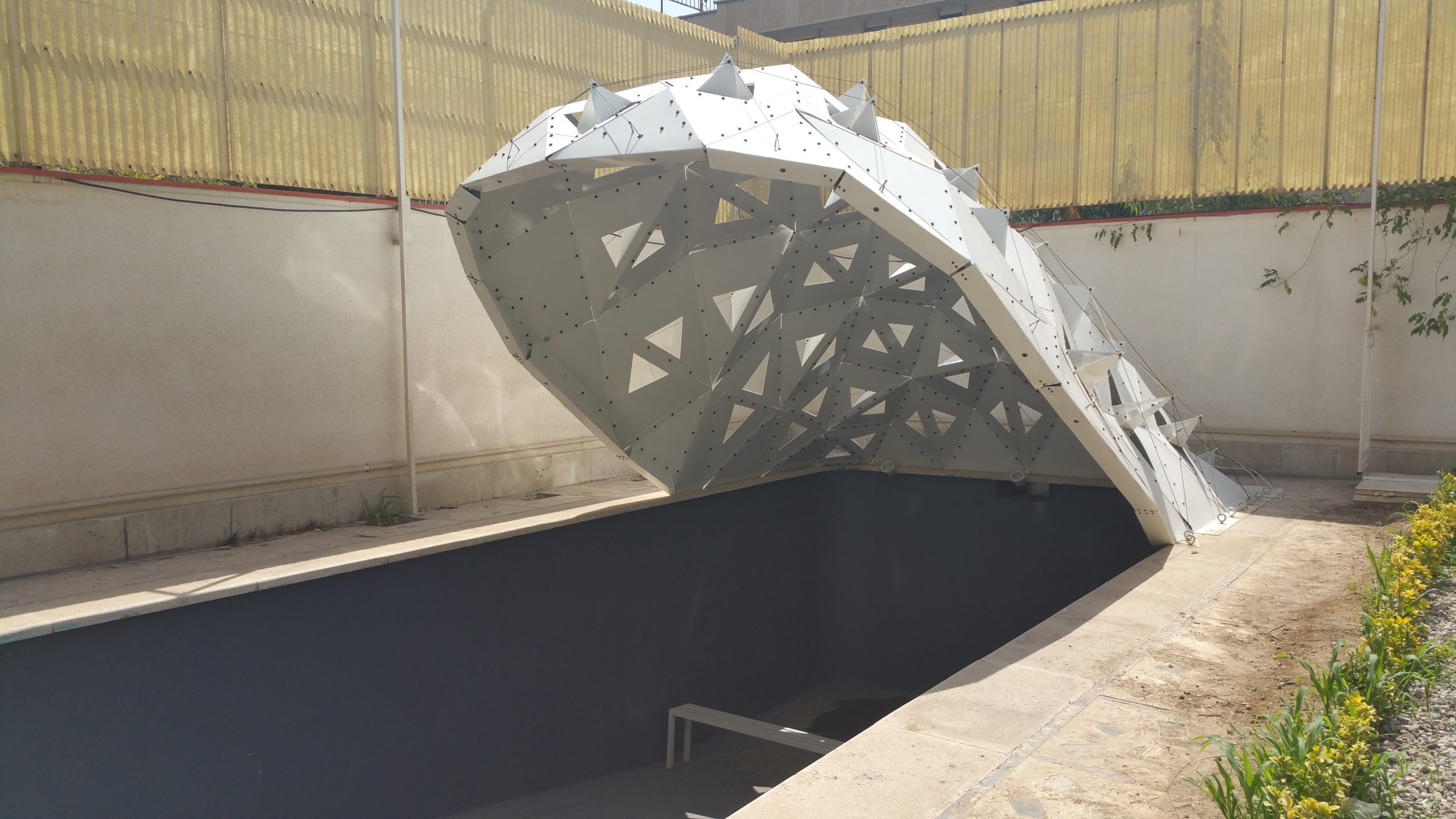 ComStruct was a two-week workshop on computational structures as form generators which took place in summer of 2015 and aimed to explore the material behavior, directionality of elements, as well as understanding structural potentiality of complex geometries. During the workshop period hosted by the Contemporary Architects Association in Tehran, Iran, the workshop team consisting of 5 tutors and 25 participants utilized the algorithmic design and analysis potentials of Rhino, Grasshopper and Karamba, as well as fabrication techniques existing in industrial zone of Tehran, the capital of Iran, to design and construct a one to one scale canopy.

The venue at the Contemporary Architects Association is located in a converted 30-years-old residential house, with an unused and empty swimming pool in the front yard. The task of the workshop was to design and fabricate a self-supporting/self-stable canopy covering the 4x10m pool, converting it into a vivid exhibition and public area. To this end, the parametric FEM program Karamba was used as the main tool to aid design development, from form-finding stage to optimizing structural shell and elements.

After a few days of experiments and studies on structural elements such as truss and shell structures via physical models and above mentioned software the starting pistol of final product’s form-finding was fired. The goal of the form-finding process was to come up with an optimal shape taking into account boundary conditions of the site (the pool) and the use of material. A multi-objective optimization was performed using Octopus.e, where parameters for use of material was combined with stress analysis calculated with Karmba engine. This resulted in a form of non-trivial nature, a concave shell cantilevered along its length, however still highly optimized concerning downwards loading.

After breeding an optimized shell structure, the surface was discretized into a folded pattern to increase the stiffness by creating inertia, while rationalizing the form in terms of fabrication. Among a bunch of rationalization techniques, triangulation was selected due to adaptability with the selected material (Aluminum sheet) and metal laser cutting approach and by converting the double-curved canopy into a grid of planar surfaces. For coming up with the most efficient pattern a couple of different patterns were tested program and comparing the structural performance of these folded patterns through Karmaba program resulted in an optimized folding methodology.

After this tessellation phase, introduction of multiple load cases took into account to simulate the structural behavior from snow and wind loads. By analyzing the now folded shape with these loads, the performance of each triangular panel was obtained in terms of local utilization and translated into a differentiation of hole sizes that was cut in the middle of each fold. These triangular holes were laser cut on two sides and bend around the last, rotating the cut material upwards with varying heights reflecting the local utilization. The directionality of the folding methodology was such that two adjacent panels’ cut material would meet and form an out-of-plane triangle.

Adding a grid of cables to the system by joining out-of-plane points of these bend triangles, converted the shell into a double-layered structure and the outcome was a three-dimensional tension truss. Using Karamba, it was confirmed that all cables were activated –however some only under some load cases. To avoid pre-tensioning each cable segment, a continuous cable pattern was applied connecting the all the peak nodes in a row. As each node connected four cable segments, the cable were weaved in and out with a zig-zag pattern. This method also implied that the cables could be pre-stressed from the ground after the structural erection was complete. At the free edges the cable ends were hidden in a designed connection that incorporated an edge-beam.And After a two-week practice on structurally driven design process with an interdisciplinary dialogue between architecture, structural parameters and fabrication techniques, finally the structure was erected just above the elderly pool, converting it into an alacritous space for students’ gatherings and public events of the institute.